Hey! I Can Speak That Language

With so much bad news in the press right now, I thought you might like to hear some good news.

In March 2017, while living in Sarchi, Costa Rica, an American named Kenny moved into the cabina behind our house. We were starved for company and happy to meet him, but shortly after arriving he was gone for several days. As is the case with many expats who’ve settled in Costa Rica, he needed to exit the country to reset his visa. The poor fellow was to spend a week in Bocas del Toro, Panama, the so-called Venice of the Caribbean.

He showed up at our back door when he got home, his right wrist tucked against his chest, hanging like a dead fish. He had injured it while playing beach volleyball in Bocas. On the bus ride back he had unclipped his fanny pack to recline more comfortably, but because his wrist was throbbing and distracting him, he forgot to grab his pack when he got off. It contained his credit cards, his bank debit card, some ID, a fair amount of cash, and the key to his motorbike.

We commiserated with his loss. Who among us has not had a moment of forgetfulness—locking the keys in the car, forgetting a purse on the back of a chair—that we haven’t come to regret deeply? That one moment leads to hours of subsequent annoyance and tribulation (and, let’s face it, cursing. If cursing were a language, my potty mouth and I would be top of the honour roll). Kenny, bless him, kept it PG for the kids.

He had money in his bank account, but he couldn’t access it without his bank card. He couldn’t buy items on credit, because his credit cards were gone. It was going to take 10 days for new cards to arrive. In the meantime, he had only 3,000 colones (about $5) on him and almost no time left on his phone plan. And what was he going to do about his motorbike?

He’d be pulling his hair out, he said, only he was already bald.

We let him use our phone to find a local pawn shop and lent him some money. He needed cab fare to get to the neighbouring town to hawk his laptop for immediate cash. He ended up getting $200 for something he’d recently paid $600 to acquire.

Are you feeling good yet?

A few days after having lost his fanny pack, Kenny burst in again. He had received a voicemail message from a Spanish speaker and eventually made out that the person (a) had his fanny pack, (b) wanted to bring it to him, and (c) needed the address so he could drive it over in the evening.

What?! None of us could believe it, least of all Kenny. Even his dead-fish wrist looked like it might reanimate.

Aha. This I happened to know. I had just spent the last week trying to figure out how to have a credit card delivered to me, naively thinking we would in fact have an address. And we did. I was able to tell him it was “Yellow House, San Rafael Street, Two Doors Down From the Alfaro Quesada Furniture Factory.” As a back-up address, we were also “500 Metres Past the Church.”

That’s right, no pesky street numbers to add complexity in Costa Rica. Kenny didn’t bat an eye; he’s lived in CR for a while. (Incidentally, while good enough for Kenny, that address was not good enough for FedEx. A Canadian friend would have to travel all the way to Panama to deliver our credit cards. But that’s another feel-good story, and we mustn’t muddy the waters here.)

That evening, right on time, a man drove up with his wife and daughter. He told Kenny the story, which I translate for you now with liberal poetic license.

Tica Heroine (aka Woman on the Bus): What’s this? It looks like a fanny pack. That gringo must have forgotten it. I won’t open it or seek personal gain in any way. I’ll just take it to the bus driver.
Tico Hero (aka Bus Driver): How kind and honest of you. Thank you.
Tica Heroine: De nada. Have a nice day.
Tico Hero: Although I could easily pocket this money for myself and chuck the bag out the window, I am as honest as that woman. (Rifles through the contents and finds the debit card for Banco Central de Costa Rica.) Hey! My cousin is the vice president of the bank. Maybe he can use the card to find the owner. I’ll give him a call. (Dials his cousin on the phone.)
Vice President: Hola?
Tico Hero: Hey there, cuz. Guess what? A gringo left his bag on the bus with all his money and ID, and his debit card is here. He’s a client of your bank.
Vice President: Really? Let’s meet up. You can give me the bag. I’ll use his debit card number to look him up in our system, call him, and then drive hours out of my way to hand deliver everything to him.
Tico Hero: No problemo. Will you accept any money he tries to offer you? It’s all still here, by the way.
Vice President: Of course not. I wouldn’t want to ruin the ending of this story!

And so the VP of the Banco Central de Costa Rica delivered Kenny’s fanny pack and all its contents, and that day I was reminded that although I may struggle to learn Spanish, kindness can easily be spoken, at any time, by anyone, in any country. Kindness, we must remember, is easily communicated.

Arthur Ashe said, “Start where you are, use what you have, do what you can.” With so much negativity and discord in the news today, this is advice I can hold onto and run with. I hope you do the same. 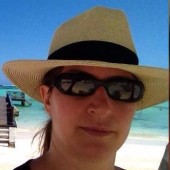 I'm a big believer in bucket lists. Since I was a kid, mine has included travelling the world, learning languages, and writing about it all. I've been blessed to have many checkmarks on my list -- 40 countries and (roughly) four languages, and counting -- but I haven't done much public writing since I lived in Japan in the 1990s. This trip, our first odyssey with our children, presents an opportunity to revisit that old ideal. I hope that as we journey, I am inspired to add as many new boxes to my list as I get to check off. I plan to sample lots of coffee and wine along the way.